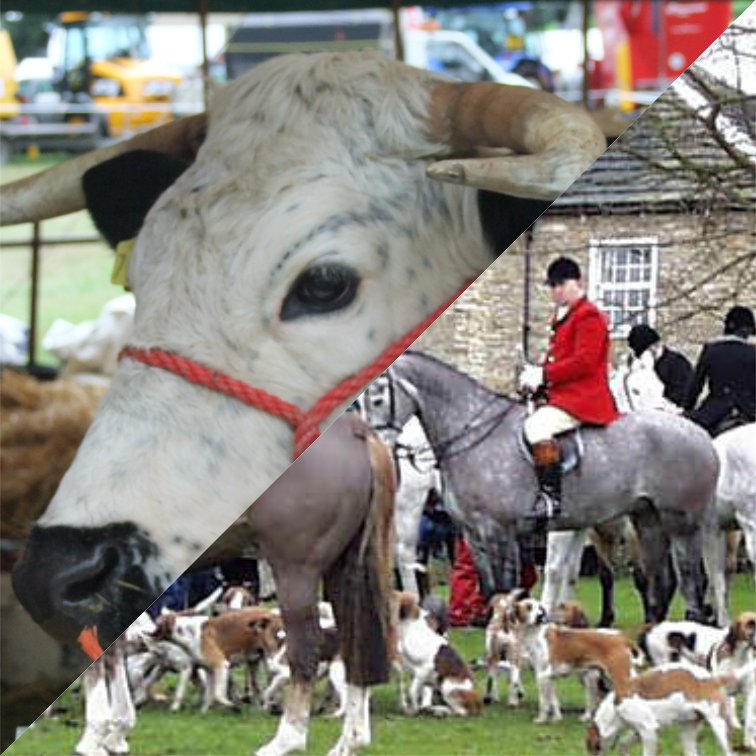 Weather is not all to be depended upon in December but an extract from the day book of Eshton Hall, the seat of the Wilson family reads :

“Tuesday 11th December 1849 – A very fine day. A great many persons at the Fair, also a great quantity of lean cattle.”

December 11th was the day of the Great Cattle Fair. Before the opening of the Little North Western Railway in 1849, all the chief graziers of the locality used to show off their Christmas fat stock down South Street and on the village greens. Then there were the dealers, with droves of Scots plus a large collection of other animals from the surrounding countryside.

There are few such picturesque fairs at the present day, for besides the bustle and bravery of so large a cattle fair, the principle street was set out with a double row of stalls by the traders in blankets and flannels, cloths and fustions, together with the ever noisy vendors of nuts and oranges, and a variety of inferior spices.

Besides these were the long and closed stall, or as its owner, taking a step in advance of the smaller fry, designated it “The Bazaar”, under whose shade were set out tier upon tier, in great variety, tea pots and tea caddies, work boxes and work baskets, and to adopt the advertisement jargon, a variety of other articles too numerous to mention.

A homely feeling and a kindly sympathy pervaded the place then, for the ladies in the neighbouring halls mingled in the scene to make their annual purchases of blankets and flannels and other comforts for the poor.

And so Gargrave has lost one more of its old attractions for the fine shows of fat Christmas cattle had long ago been discontinued, and the stalls of the various traders had dwindled down to nuts and oranges.

The day after the Cattle Fair was observed as a sort of hunting holiday by all the inhabitants who were neither too old or too young to take part in the pleasures and sports of this annual hunting day.

No inconsiderable numbers from the surrounding district who could “muster a mount” joined the mounted portion, and an interesting cavalcade they were; on frisky cobs, on racing ponies, on carriage horses, on cart horses and on any other whether duffer or donkey, it mattered not, they all helped to make an interesting and amusing spectacle.

The meet on Gargrave Green was more than picturesque, it was handsome for many reasons; the town itself is one of the prettiest in the country, with the clear river streaming past, spanned by an handsome bridge, a tall Church tower, too, rising above wide streets and spacious roadways.

It was a cheering sight to witness the hilarity of the crowd that gathered at 11 o’clock on the top of Kelber Hill.

Sadly the year 1881 was the last time the hounds hunted round Kelber Hill, their withdrawal being necessitated in consequence of the greatly number of trains on the Midland line that runs at the foot of Kelber.

Although the annual meet on December 12 has long since passed into history, we still have today the traditional and colourful spectacle of the meet of the Pendle Forest and Craven Hunt on the Low Green on Boxing Day, which attracts hundreds of sight-seers from all around the district.

As from February 2005 hunting with hounds has been banned by parliament so we must hope that the meet will continue in some form or other. We are sure it will.